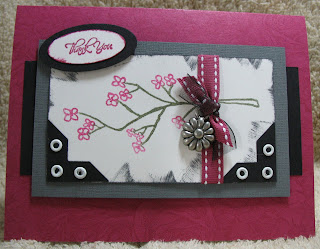 This week's color combo on SCS are colors which lend themselves to elegance!! Purely Pomegranate, Basic Black and Basic Gray.
I needed to make a thank you card for my MI secret sis from the MI Minglers event held this past weekend in Birch Run, MI. My secret sis was Debbie Stevens and if you have the newest copy of Take Ten, she's got 2 cards in there!!!
I started with my base card of Purely Pomegranate and then just played around with the other 2 colors until I found layout and look I liked. I knew I didn't want the black to have very heavy presence since the card base was already a dark color. I also decided to use white eyelets on the photo corners instead of brads for different look.
The white neutrals is actually Shimmery White and just gives that extra pop of elegance to the card. The flower charm was a last minute thought as I was finishing up and I think it adds just the right touch here.
The flower stamp I used is from the new Simply Organic set from Treehouse Stamps which was released on March 7th. You can check out the site here: Treehouse Stamps. You wont be sorry you did!! I used my Always Artichoke marker to color the stem and my Purely Pomegranate stamp pad and blender pen to do the flowers directly on the stamp. The sentiment is with their new Everyday Sentiment set.
The main image panel of the textured Basic Gray and Shimmery White is up on dimensionals and then the sentiment ovals is on another dimensional!!
I'm in the process of making a notepad to go with this and I'll post that later. 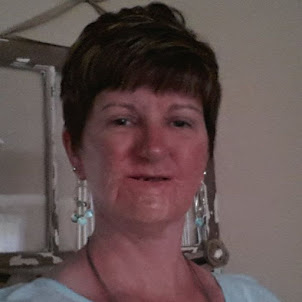 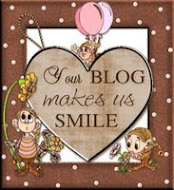 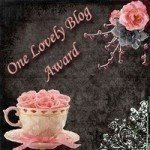 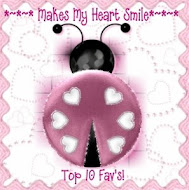